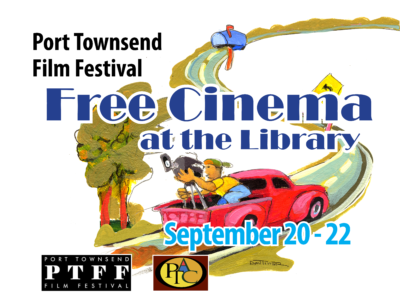 Jefferson County Library is proud to be a part of the 2019 Port Townsend Film Festival by hosting a free cinema at the library. All films are open to the public free of charge with advance ticket. Tickets will be available at the library 30 minutes prior to film start.

Friday, September 20, 3:15 pm – Jay Myself
Photographer Stephen Wilkes creates an intimate portrait of renowned photographer, Jay Maisel, and the 30,000 square foot building that he’s inhabited and filled with his eccentric collection of beautiful random objects for the last 40 years. This film runs 79 minutes and is preceded by the 7-minute short Photograph of Jesus.

Saturday, September 21, 10:30 am – Motherload
Ride with Liz Canning, cyclist and mother, on her quest to understand the increasing isolation and disconnection of the digital age, its planetary impact, and how cargo bikes could be an antidote. This film runs 81 minutes and is preceded by the 4-minute short Blue.

Saturday, September 21, 12:30 pm – Twelve Conversations
What compels people to confide in one another? A chance meeting in a Port Townsend underground record shop, the intimate power of words and the way the future sometimes reveals the past. This film runs 102 minutes.

Saturday, September 21, 3:00 pm – The Wild
In this follow-up to 2014’s documentary, The Breach, director Mark Titus outlines the ongoing struggle in Bristol Bay to preserve the wild salmon fishing industry, which faces devastation if a massive copper and gold mine is constructed. This film runs 63 minutes and is preceded by two short films: Welcome to Gwichyaa Zhee and dukʷibəɫ swatixʷtəd (Changer’s Land).

Sunday, September 22, 2:00 pm – Reviewers Choice Shorts
A collection of films from around the world representing the genius of filmmakers to capture and portray individual human drama. These shorts were given highest ratings by the PTFF review team. The film series runs approximately 81 minutes. Films List