As the presidential campaign heats up, we seek to make sense of some of the most divisive issues facing the country.  Join us Wednesday evenings in January to discuss four of our nations most controversial topics: 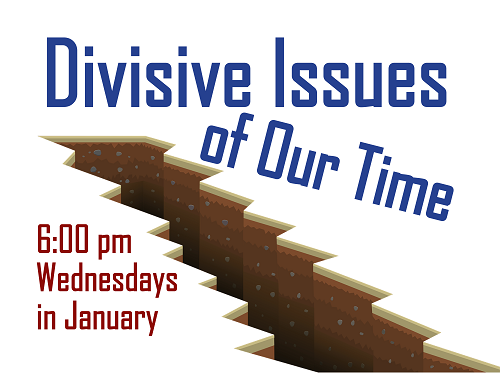 January 8 – America’s Cold Civil War
As the presidential campaign heats up, and the culture wars of the past several decades have intensified, the country now finds itself deeply divided. Can these differences be resolved? Joyce Francis, Ph.D., will share an overview of recent data and research into our country’s deep political divide, and help try to make sense of some of the issues being debated.

January 15 – Roe v. Wade
Since Roe v. Wade granted American women the legal right to abortion in 1973, much of the United States has been divided into pro-life and pro-choice camps. Join Pete Gartlan, J.D., for a discussion surrounding the history and possible future of abortion rights under the federal constitution.

January 22 – Do Social Democracies Work?
How do social democratic ideas work in other countries? Presenter Ken Ing will explore whether social spending policies in Europe have been successful and efficient, and what lessons can be learned for the United States.

January 29 – Clearcutting Bretton Woods
Seventy-five years after the Bretton Woods conference laid the foundations for much of today’s global economic order, uncertainty and social tensions continue to intensify. Join Joyce Francis, Ph.D. to discuss the dismantling of the liberal international order and its implications for global security.